Nicolais, T. (2016, October 18). How to Use Real Estate Trends to Predict the Next Housing Bubble. Harvard Extension School. https://extension.harvard.edu/blog/how-to-use-real-estate-trends-to-predict-the-next-housing-bubble/

A real estate expert explains the predictability of the market. –Teo Nicolais

The destructive wave that swept across the US economy in 2008 seemed to catch the world completely by surprise. The phrase so often used to describe it, a “financial tsunami,” reinforces the popular belief that the disaster arose suddenly.

In reality the build up to the Great Recession could be clearly tracked and its timing predicted with a stunning degree of accuracy long before the phrase “collateralized debt obligation” entered the popular lexicon.

The real cause of the crisis is far older, far more interesting, and far more profitable to understand for those interested in what lies ahead.

As early as 1876, Henry George observed the curious cycle through which real estate markets inexorably move. His findings can be summarized (with the help of Glenn R. Mueller’s refinements) as follows. 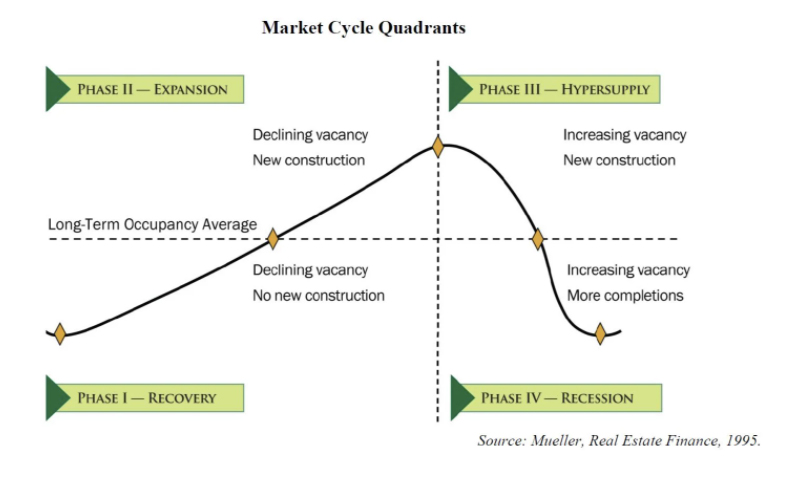 We know the characteristics of a recession: high unemployment; decreased consumption; and decreased company investment in buildings, factories, and machines. The price of land, essential for economic activity, is at its lowest point in the cycle.

As population increases so does the demand for goods and services. This expansion is typically hastened by government intervention in the form of lowered interest rates (the key ingredient for investment).

With increasing demand and lower investment costs, companies expand their businesses. They hire more people, build new factories, and buy more machines. This expansion adds to the demand for land (buildings) on which the economic activity can take place.

The transition from recovery to expansion occurs when companies and individuals have bought up or rented most of the available buildings. Occupancy begins to exceed the long-term average. As unoccupied buildings become scarce, landowners raise rents. 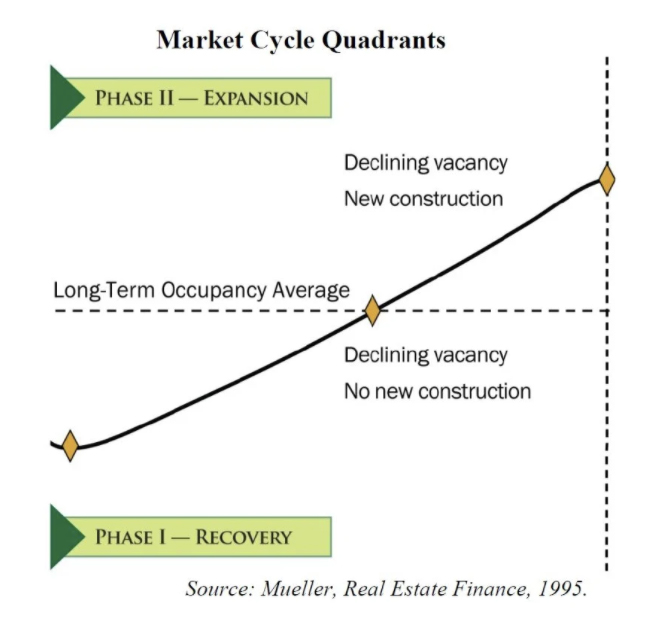 Basic economics tells us that new supply will satisfy demand and eliminate the upward pressure on rents and land prices accordingly. But here’s the twist: it takes a long time to add new inventory to the real estate market once it’s needed.

Market studies must be undertaken. Land sales must be negotiated. Zoning and permitting must be obtained. Financing for the project must be found (no easy feat coming out of a recession). Only then does new construction begin. And the construction itself takes a long time (two to five years for the average development).

By the time meaningful amounts of inventory start to come online, the overall economic expansion has been under way—without the benefit of new supply—for five to seven years. During all of that time, occupancy rates and rents have been increasing.

In fact, the cycle reaches a point at which rents are not simply going up—they are going up faster and faster (rent growth is accelerating). Investors build this trend into their forecasts. And we reach that critical point in the real estate cycle where, as William Newman documented as far back as 1935, the price of land begins to reflect not the existing market conditions but rather the anticipated rent growth to come.

Investors, believing the price is justified by the future growth, overpay for the land relative to the current market, and start building for a future market. The boom is officially on.

The First Indicator of Trouble

The delineation point between expansion and market hyper supply is marked by the first indicator of trouble in the real estate cycle: an increase in unsold inventory/vacancy. 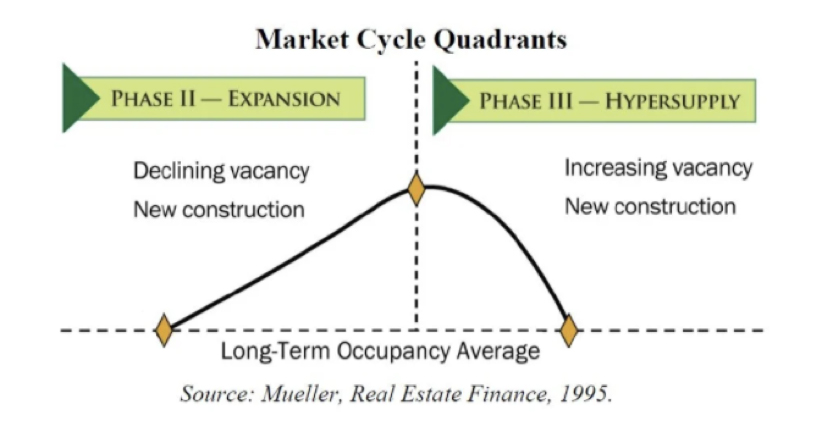 This occurs as new completions from the mid-expansion phase begin to quench the market’s thirst for product. With occupancy rates above the long-term average, rents are still rising but the rate at which they are rising now changes: rent growth is no longer accelerating, but rather decelerating.

This is a precarious time in the real estate cycle. And what happens next will determine how severe the upcoming recession will be.

Wise developers, noting the change in direction of rent growth and factoring in the likely consequence of units currently under construction being completed, should choose to stop building. If you find such a developer, please let me know.

The Second Indicator of Trouble

The transition from hyper supply to recession is marked by the second indicator of trouble in the cycle: occupancy falls below the long-term average. 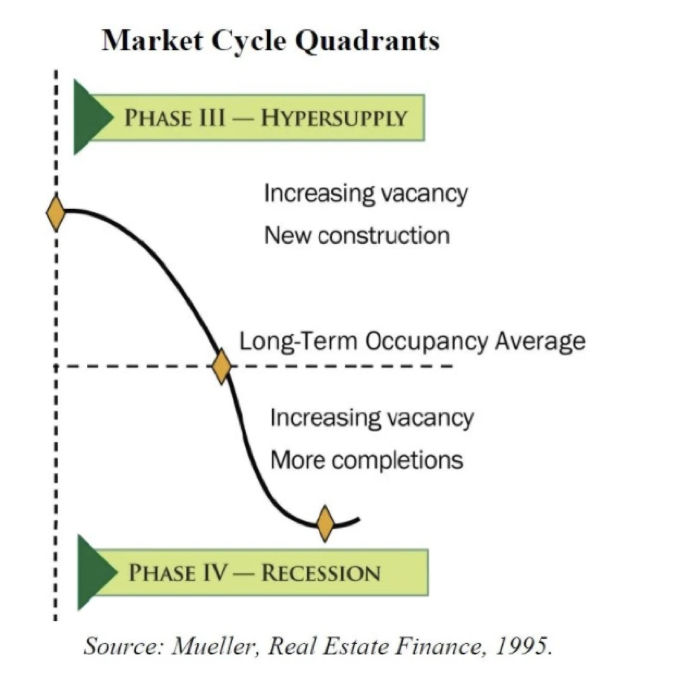 New construction stops, but projects started in the hyper-supply phase continue to be delivered. The addition of surplus inventory leads to lower occupancy and lower rents, which significantly reduces revenue for landowners.

The Third Indicator of Trouble

Finally, investors must watch for the third indicator of trouble: an increase in interest rates.

The increases in prices throughout the broader economy that accompanied the expansion and hyper-supply phase will, sooner or later, force the Federal Reserve to fight inflation by increasing interest rates.

The good news is that this halts any developers still forging ahead in hyper-supply mode because the increase in borrowing costs makes new developments financially unfeasible.

The bad news is that it’s too late for the projects started in the midst of the boom. The music stopped, but there are still people rushing toward the dance floor.

The Duration and Frequency of the Real Estate Cycle 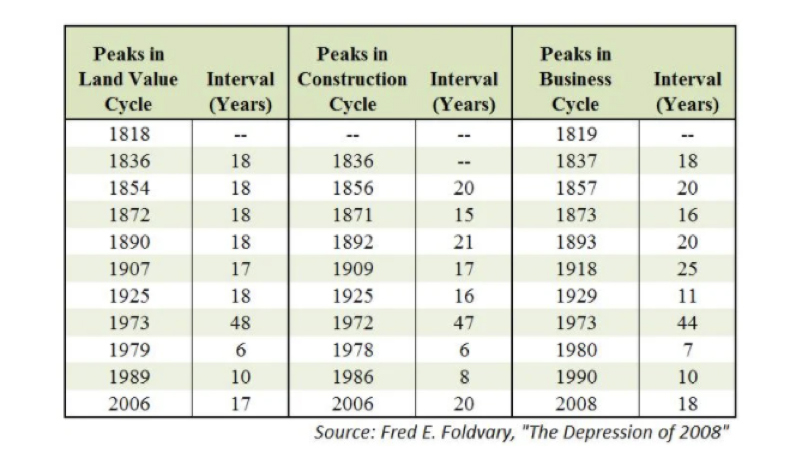 With just two exceptions (World War II and the mid-cycle peak created by the Federal Reserve’s doubling of interest rates in 1979), the cycle has maintained its remarkable regularity even in the decades after Hoyt’s observation.

Where Are We Now?

Today, most real estate markets are well into the expansion phase. Many, as indicated by skylines filled with cranes and slowing rent growth, have already entered the hyper supply phase.

Those who study the financial crisis of 2008 will (we hope) always be weary of the next major crash. If George, Harrison, and Foldvary are right, however, that won’t happen until after the next peak around 2024.

Between now and then, aside from the occasional slow down and inevitable market hiccups, the real estate industry is likely to enjoy a long period of expansion.

Nicolais, T. (2016, October 18). How to Use Real Estate Trends to Predict the Next Housing Bubble. Harvard Extension School. https://extension.harvard.edu/blog/how-to-use-real-estate-trends-to-predict-the-next-housing-bubble/